A peaceful world is dying after centuries of prosperity.  Rejected by the military, one man battles a corrupt government to discover the fate of his mother, a brilliant scientist who disappeared along with the device that can save their planet.

Bruno invited me to write the screenplay for this action drama as part of an extensive proof-of-concept undertaking.   He assembled an impressive team: 3D and matte artists, compositors and set designers, costume designer, composer, sound experts, and more.   The teaser trailer debuted at San Diego Comic-Con International . See the full list of contributors in the credits.

In many ways, screenwriting is to other types of writing as a formal Japanese tea service is to serving dinner for friends.  The format is very structured with strict limits and specific industry expectations. Exposition is frowned upon; everything must be expressed in action and dialogue. No matter the topic, you are constrained to 90 to 120 pages. Exceptions exist, but unless you are creating a high art film or can already write your own ticket in Hollywood, writers are expected to adhere to traditional forms.

The process for creating White Storm seemed restrictive to start and then strangely liberating as I strove to efficiently tell a story within formalized constraints.

“White Storm” was the most challenging writing project of my life.

Creating a screenplay from someone else’s concept is a wholly different creature than writing your own concept. It requires teamwork, collaboration, and a willingness to climb inside someone else’s head and rummage around for the salient bits.

To start, I immersed myself in screenplays and movies that captured elements Bruno wanted to incorporate into the story, such as pacing, mood, dialogue, relationships, character development, world building, and action. For some, I watched and rewatched with the movie’s screenplay in hand as I reverse engineered how some of the greats had closely followed or broken the rules of Hollywood.

Then came the hours and hours of story development meetings with Bruno.  Skype became my virtual home.  Most rewarding were the marathon, in-person meetings where we hashed out broad concepts and rank after rank of interrelated details. We met halfway between LA and San Diego.  Camped out in a restaurant with open wi-fi, we talked until both of us were slumped in our booth. Our longest meeting was 10 hours.

I learned so much from this process and especially from Bruno. His passion for his story was inspiring. His dedication of the project to his mother was touching.  As I crafted a new world in dialogue and action, his insider knowledge about the movie industry opened a new world for me. “White Storm” was the most challenging writing project of my life.

“… the creation of a world, the plot, and character development have to happen in roughly 90 minutes.”

We started out on the same wavelength.  I already loved the movies that Bruno recommended. I was on board with the type of story he wanted to tell. We both laughed about the crazy compromises that directors had to make in Hollywood to bring their stories to the Big Screen. And our imaginations soared, stoked by our shared passion for space opera.

Where I ran into trouble was my science background.  When fiction has the word “science” tacked onto the front of it, I want worlds to obey the laws of physics–or at least to be internally consistent.  As I filled in the gaps in the screenplay, I struggled to replace, “There be dragons here,” with plausible sequences of cause and effect.

Bruno unflinchingly told me, “You are thinking too hard about this; this is for Hollywood.” Our verbal wrestling matches were the cause of some of our longest meetings.  In the end, I realized that if audiences could suspend disbelief, then I could wave my magical pen where it was necessary to keep the story moving.  After all, the creation of a world, the plot, and character development have to happen in roughly 90 minutes.

Writer’s block clutched me by the throat.

Opening scenes are crucial. Bruno knew exactly what he wanted to start the film. From there, setting the mood and setting up the characters took a lot of the first months of the project.  I became obsessed with the backstories of each of the primary characters so that I knew them better than many real people. Those opening sequences would tell audiences in a nutshell the world in which our main protagonist lived and the influences that would determine his decisions.

Bruno and his team had already created the technology and look of the world.  They’d been working on this a long time before I joined the project.  That was a tricky part of the writing effort.  In screenplays, those things are usually left for the director and special effects folks to hammer out, after the screenplay is complete.  But Bruno was the producer and director, so he wanted very specific visual imagery in mind that he wanted reflected in the script.

Bruno knew where his hero would end up and what he would accomplish.  That big finale, full of emotion and punctuated with action was the culmination of everything that would happen in the middle. The characters struggled, loved, and died over and over again with every rewrite–and there were many. Endings can be changed based on the reactions of a test audience. But I knew in my heart that our final outcome, the final result of the search for salvation was the only real way the story could end.

The rest was cake.  I say that in jest. Generating my ensemble of characters and creating the dialogue that wove their relationships into a tapestry the audience would care about was like giving birth.  Lots of pain. Dark doubts that I could finish this gargantuan task bubbled up from unknown depths. Writer’s block clutched me by the throat. My remedy was to sequester myself in an entirely new location.  I booked a desert retreat with only Joshua trees and quail as external distractions.  I could do nothing but write and pace, pace and write more. It worked.  The threads of plot and required action sequences fell into place.

Once Again, with Feeling

In the end, Bruno liked the story.  Then he completely changed a couple of foundational premises–and I started all over again.  “Less humor! More battles! ” were his clarion cries. Even some relationships changed. Into the fray I leapt and resculpted the story to meet the new parameters.

Pain.  Anxiety.  Struggle. Squeezing my brain for every drop of dialogue. It was the hardest and best writing experience of my life, and I wouldn’t change it for anything.

My hope is that this expansive saga will be produced as a full length movie or adapted as a television series.  “White Storm” incorporates drama and action in a space opera setting that spans generations and places cultures in conflict on a galactic scale. I know that most scripts never see the light of day.  Still, after a year and a half of immersive writing, it feels like I’ve handed off my foster child.  I hope it grows up to be a respected movie some day. 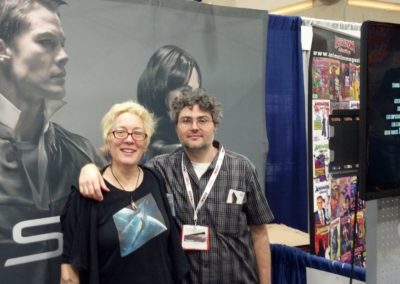 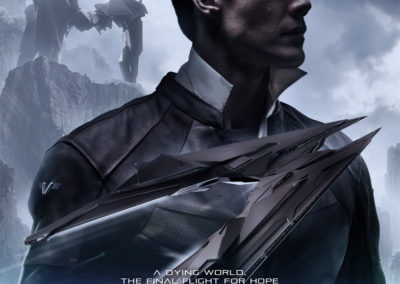 This poster dominated the booth at Comic-Con 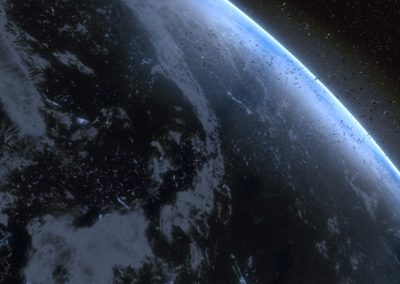 The world of White Storm 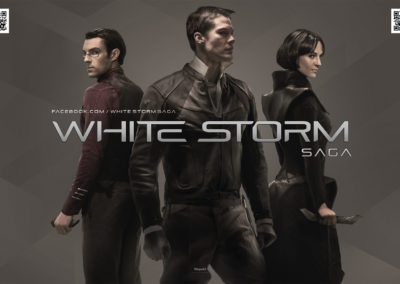 The actors who worked on the teaser video 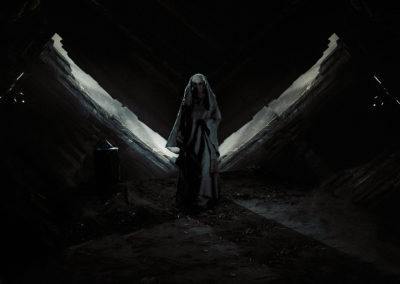 One of the video sets 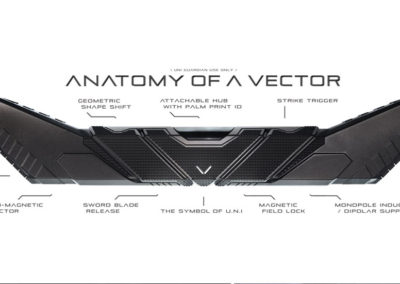 Vector weapon as envisioned by Bruno 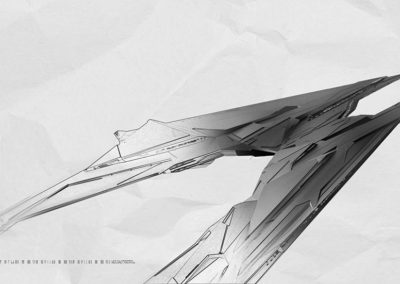 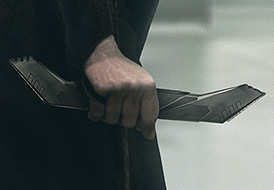 In the actor’s hand 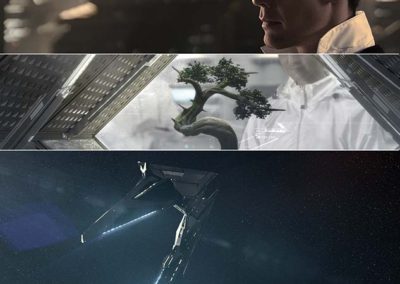 Excerpts from the trailer highlight the artistic talent of Filmpaint, inc 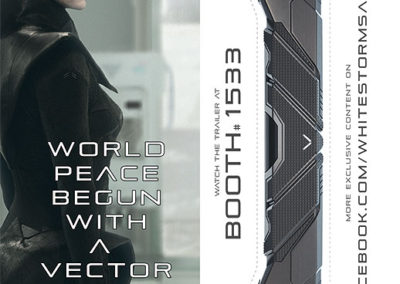 All images are copyright filmpaint, inc. and may not be reproduced without permission; all rights reserved
This is a self-funded project. Find out more on facebook.com/whitestormsaga.